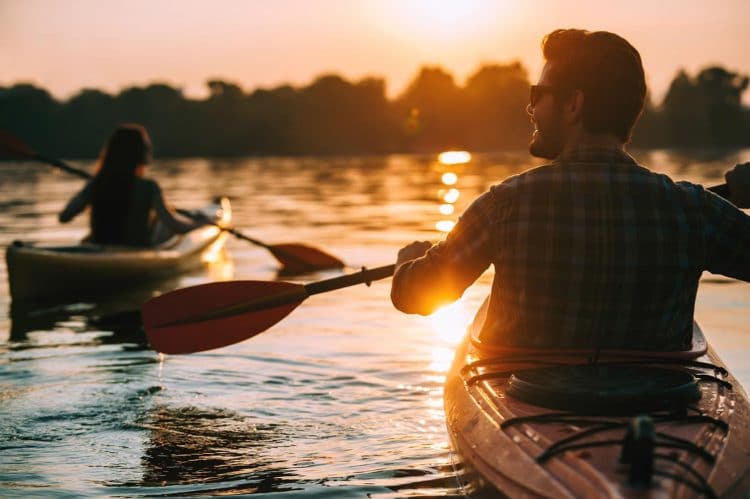 One of Shakespeare’s most famous lines comes from his play Romeo and Juliet. “What’s in a name?”

Our names define who we are. When you meet someone on the street, you can guess with reasonable certainty that you’ve spoken with a Peter, Todd, Karen, Lily, or Taylor.

Names are the first door we open to uniqueness. That’s why it is a human tradition to name everything.

That includes naming a kayak.

Do You Name Your Kayak?

Kayaks are a boat, even if the design is more to be a personal watercraft. It is a tradition to name vessels for several reasons, including that it’s considered good luck. Ancient sailors named their boats after saints, gods, or goddesses to bring good fortune. With the wrong name, it was believed someone could get lost at sea.

A boat without a name is considered bad luck. Even a simple moniker is enough to bring good fortune and safety to the vessel.

The first naming ceremonies for ships were performed in Babylonia about 5,000 years ago. When sailors from Egypt, Greece, and Rome took to the open seas, they sailed or rowed their way toward new shores on boats that had a name.

Although there is no formal procedure to name a ship, especially if it’s a kayak, there might be specific rules to follow in some jurisdictions.

If you must register the vessel, the local authority might require a unique moniker to distinguish the boat from others.

Many ships are named after women, and that unofficial rule applies to kayaks. Although the practice is in decline, the goal was to embody a sense of nurturing, companionship, and support while crossing the waves.

Boats were often seen like a mother taking care of a child.

How to Name a Kayak (or Any Other Boat)

When it is time to give your kayak a name, it’s important to think about the bond you’ve developed with the vessel. How does it help you connect with others or with nature?

The name you select sets the tone for the adventure you’ll have while sitting in or on top of the kayak.

If you’re a little stuck with the naming process, here are some steps you can take to turn this exercise into a successful and fun experience.

1. Think About Your Kayak

Each kayak brings unique qualities and attributes to the water. Color and shape can be included in the naming process.

Imagine that you have a beautiful green vessel that came straight from the mold, and it’s ready to crush some waves with speed. What comes to mind when you start brainstorming?

Here are some options that I might consider for my kayak.

Whatever quirks you can find in the kayak will contribute to a better name. Even if you settle for something like Macha T or Big Poppa G, you’re setting the stage for a great time.

Kayakers often choose names that try to fit in with the masses instead of letting them stand out in the crowd.

Do you want to be like everyone else and float downstream, or are you the kind of person who paddles against the current?

Since I love music from the 1990s, I might think about naming my new kayak after one of my favorite songs.

Let’s use an orange Pyranha Machno as an example here. Since I love R.E.M., the most likely candidate for a name would be… Orange Crush. Original, I know.

If I really challenged myself, I might call it Doctor Who. That’s because another song I love is called “Standing Outside a Broken Phone Booth with Money in My Hand.” After all, the good doctor travels in a Tardis disguised as a phone booth.

It’s your kayak. Name that vessel whatever you want.

With that said, I got a lot of flack after naming my first red kayak “Snoopy 1.” It was in honor of his Red Baron adventures, of course. Still, I had to keep explaining that logic to everyone.

I even had a buddy who thought the name was “Sloopy 1,” so he kept singing, “Hang on, Sloopy! Sloopy, hang on!” whenever we’d go through a bit of current. It got annoying fast.

That’s why I highly recommend testing out your name with your friends group. If you know that the moniker vibes with everyone, you can share some high-fives and be on your way.

If not, you still have some time to figure things out before you paddle toward something remarkable.

What Is the Best Kayak to Buy Today?

The best kayak for general use, including lakes and open water, is the Driftsun Teton 120. Its versatility creates a well-balanced profile that remains easy to control, even with rough conditions. The length and added stability help with speed, while the sitting area has enough space for up to three.

When you invest in the Driftsun Teton 120, you’ll have a vessel that supports up to 500 pounds.

At 12 feet, it has lots of space for fishing. You have four flush-mount capped rod holders and two mounting points for additional accessories.

If you need storage, you have dual watertight hatches available with a third bungee option. It’s fully outfitted for easy transportation, providing four fixed handles that make lifting a breeze.

Since it only weighs 72 pounds, it’s possible to get out there for a solo adventure.

The hull of the Driftsun Teton 120 is made from a single piece of rotomolded high-density polyethylene. That gives the kayak its durability and strength.

I love taking this kayak (I call it Blue Crush) out each weekend for some early morning fishing. There’s a beautiful lake about ten miles north, so I strap it to the luggage rack of my SUV and head out for some me time.

Naming a kayak can be a lot of fun. What will you call yours?